Alright, another week down. We are getting pretty close to being caught up with the current episodes of One Piece. We’ve passed the 800 episode mark now. This week we watched episodes 793 – 811. These were mainly full of Luffy fighting. He fought Cracker one of Big Mom’s 3 top officers. Luffy also fought Sanji. Yes, he fought Sanji, I’ll explain later. Luffy also fought against Big Mom’s army. Oh, and by the way, this all happened back to back with Luffy fighting all night facing one opponent after another.

Before we get deep into Luffy’s fights, last week I promised I’d talk a little more about Sanji’s family since I didn’t manage to fit it into my last post. Sanji’s family is basically a bunch of heartless jerks, except for his sister, who pretends to be a heartless jerk when her other family members are around so she doesn’t get bullied. Apparently, all of Sanji’s siblings were genetically modified to be super strong and have no fear. Sanji, who is apparently the third son of a set of quadruplets, for some reason reverted back to being a regular human shortly after birth. Thus, his father considered him to be a failed experiment. He pretended that Sanji died and locked him up in a prison cell until, eventually, his sister helped him escape. His father was glad he was running away because he couldn’t bring himself to kill him and he figured the hard world would do it for him. Needless to say, Sanji’s family is pretty messed up. 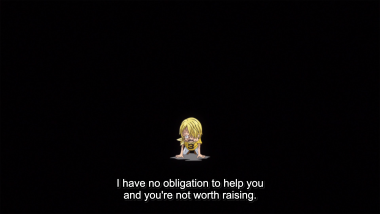 The reason why they are forcing Sanji to marry Big Mom’s daughter, Pudding, is so they can use Big Mom’s power for their own selfish reasons. Sanji’s father didn’t want any of his sons to have to marry into Big Mom’s crazy family, but when he saw Sanji’s wanted poster, he remembered he had another son. So, they are making Sanji go through with this crazy marriage. They threatened to kill Sanji’s only real father figure back at the sea restaurant if he refused. On top of that, they put bracelets on his hands that will explode if he tries to run away or take them off and only Big Mom has the key to these bracelets. Sanji is in a pretty rough position. 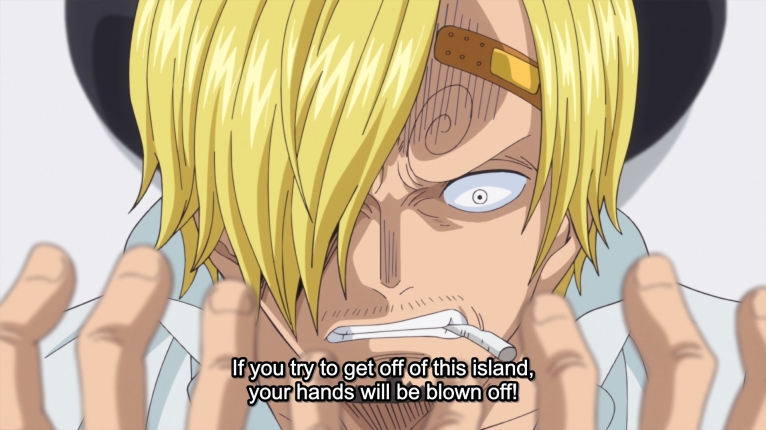 Meanwhile, Luffy’s group makes it to Whole Cake island where Big Mom lives. They split up as soon as they get there. Brook leaves with Pedro, one of the Minks that came with Luffy from Zou, and they go look for the road ponegliff that is in Big Mom’s possession, to steal a rubbing of it for Robin. The rest of the crew goes with Luffy to rescue Sanji, but of course, they get lost in a forest and get separated. Chopper and Carrot (the other Mink that came with them from Zou) ended up trapped in a mirror world by one of Big Mom’s subordinates. 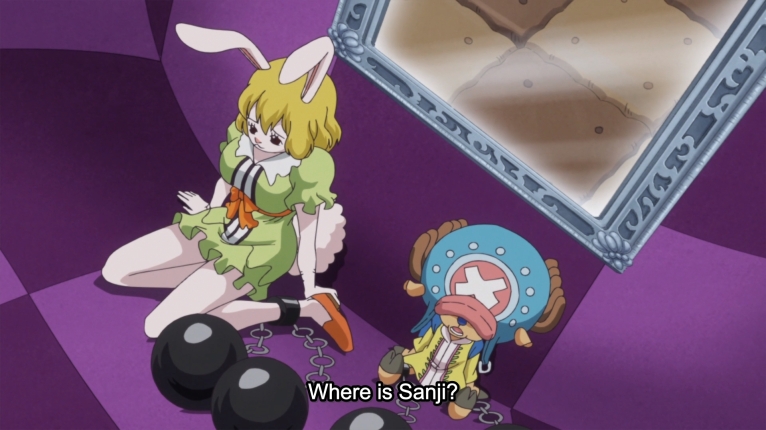 Luffy ends up fighting Cracker, one Big Mom’s 3 Sweet Generals, and he has an 800 million berry bounty. He’s really strong; Luffy was forced to use fourth gear just to beat him. It turns out though, that he actually just broke his armor. 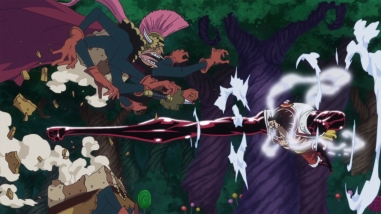 Cracker has the ability to create biscuits, and he is able to make them super hard and create them in unlimited numbers just by clapping his hands. Luffy was able to defeat them pretty easily in fourth gear but they just kept coming, until Nami came and softened them up by making it rain. Then Luffy just started eating all of Cracker’s biscuits clones. Eventually, though, Luffy became full. Then he turned into a new form of fourth gear called Tank Man. He used this new form to blast Cracker all the way back to Big Mom’s palace. 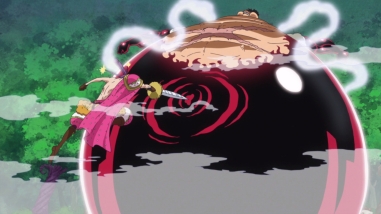 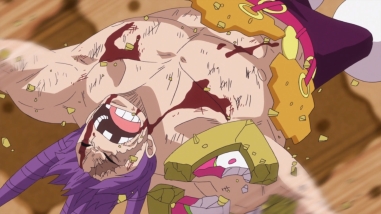 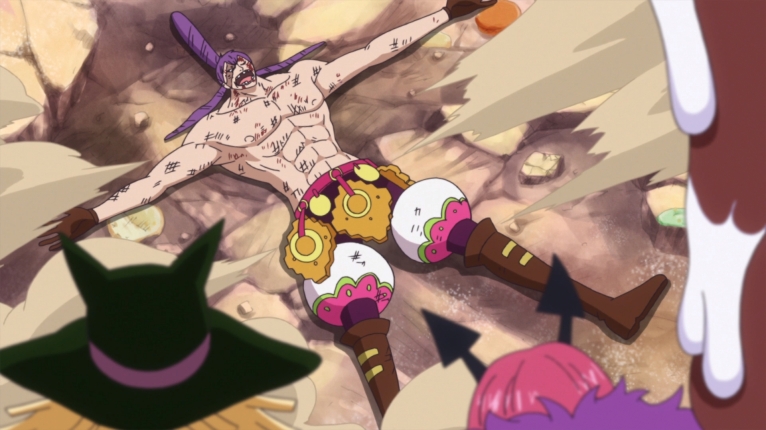 Luffy and Nami headed over to Big Mom’s palace to rescue Sanji, but they ended up running into him on the way. Sanji treated them harshly in front of his family to try and make it look like he’s cut his ties with them. Of course, Luffy didn’t believe any of Sanji’s words. Sanji proceeded to beat up on Luffy, but Luffy refused to fight back, so Sanji beat him half to death before walking away. Luffy got back up and said he’s going to be waiting in that exact same spot for him to come back. He even goes so far as to say he can’t become King of the Pirates without him and he’s not going to eat until Sanji cooks for him again. 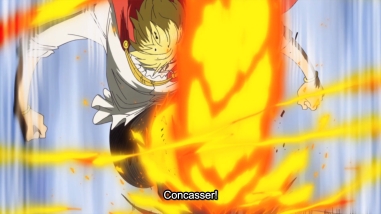 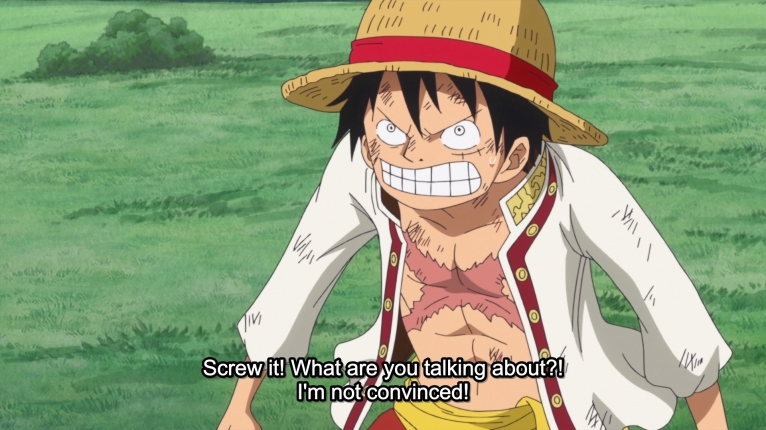 Meanwhile, Big Mom hears that her son Cracker has been defeated and landed unconscious on her doorstep. She does the only logical thing; she sends her army to kill the Straw Hats. When the army arrives, Luffy doesn’t run. He stays in the same spot, waiting for Sanji to come back. Luffy fights the entire army and tells Nami to run away. Nami couldn’t abandon her captain though, so she stayed and fought with him. Luckily, there was a big thunderstorm going on so, Nami was able to use it to strike down a large number of fighters in the opposing army. 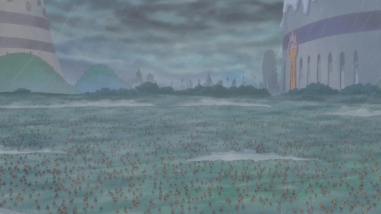 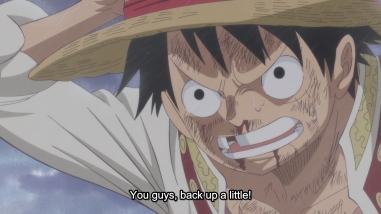 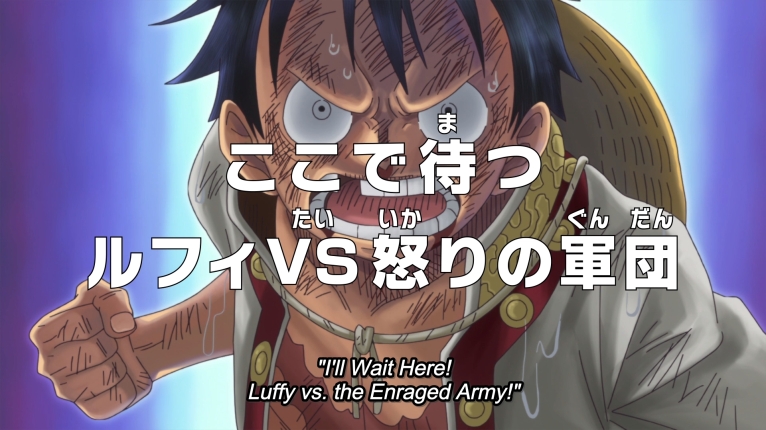 I can’t wait to see what happens next. The story is getting more and more interesting. Only 40 episodes left until we catch up with the current weekly episodes. It’s going to be sad when I don’t have tons of One Piece to binge anymore but it has been a great journey and I’m still looking forward to the rest of it.