Final Verdict: It’s a good story about coming of age that isn’t directed at high schoolers. I really enjoyed it.

This story follows the story of Handa. He is a young calligrapher living in the heart of Japan. From the very beginning, we get the vibe that his work is well known and that he’s always been praised for his talents. He’s a perfectionist when it comes to his craft and also very prideful with a hot temper. In the beginning, we see an old man (who we learn is the director) critiquing his work in a gallery. He says that his work is lacking “heart” and that it’s very “stock”. Not being able to read Japanese and having no knowledge of what a calligrapher is outside of this anime, it was hard to tell. However, from an untrained eye’s perspective, it was very neat and centered and clean. It was “perfect”. That seemed to be what the problem was. Handa flies off the handle at the director’s comments and punches him in the face and then throws a shoe at him.

This obviously means nothing good for Handa seeing as how Handa is young (23 if I remember correctly) and the director is an old man. This creates a big scandal and Handa is sent by his father to go live on an island until things blow over. This is where the story really starts. And while this is not the best reaction to an old man, I get kind of excited when the first episode starts with a guy punching an old man in the face. It usually leads to good and interesting things, and I wasn’t disappointed with this anime.

Handa is an entitled, stuck-up, city boy who is used to being praised for his work. When he gets to the country island, things are vastly different. For one, his home used to be the “secret base” for the kids in the village, and he cannot get rid of them. At first, he is greatly irritated and annoyed by them, but he soon learns the charms of the island town and the kindness of the people in it. As Handa becomes more accustomed to living in the village, his calligraphy begins to show that. He becomes inspired by nature and the people around him and little by little, he grows in his art and as a person. Naru is the little girl who pretty much runs the town. She is a loud, rambunctious tomboy who likes hanging around Handa and is instrumental in making him think outside of himself. They go on adventures and he teaches him about country life and he teaches her (and some other people) about calligraphy and learns how to become a decent human being. He eventually creates some really amazing stuff and works up the courage to apologize to the director for punching him in the face. 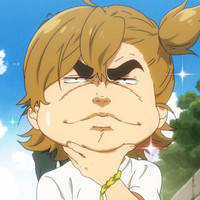 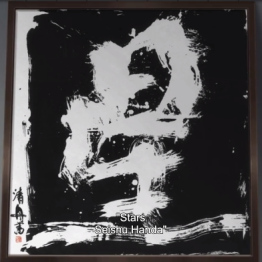 I like this story a lot because it was a coming of age story for a 20-something. Most stories center around high school — which is fine. High school is a place where you really start to figure yourself out. But there is also life after that and I like how this anime explores that. I like that at the beginning, Handa is a self-absorbed wad of entitlement who has no idea how the world outside of his life really works. That’s kind of what real life is like, and he isn’t forced to grow up until he’s put around some kids and he realizes that HE IS THE ADULT. And, speaking as a 20-something, that’s a life-altering mind-shift — from being the kid in the room to being the responsible one in the room. The one who will be blamed if something goes wrong. 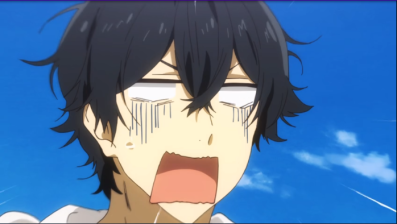 The story focuses on Handa, but it touches on all phases of life and I think that’s pretty impressive. It touches on the competitive nature of middle school girls; the care-free, dangerous fearlessness of children; the “what next” feeling of a senior in high school; the empty nest syndrome of a mother with an adult child; the “it’s time for the next generation” feeling of men who’ve been a career for decades.

In the end, I was really impressed with how the showed Handa growing up little by little and getting inspired by new things. The characters felt like they could actually be people and I like that. It wasn’t an unrealistic story by any means and it was a nice change of pace from what I usually watch. I would probably actually watch this again and I would definitely recommend it, especially if you’re past your high school phase of life.